Hey there! Some quick housekeeping before we get started:

1. A quick shout-out to the 82 (!!!) of you that caught our free book Easter egg in the last issue. There was actually a two-way tie for first response between Anita (Pelicon Brewery in Slovenia) and Vivienne (Lineman Microbrewery in Dublin)—hope you both enjoy the book.

2. Yesterday was CODO’s 13th anniversary. We were going to dedicate a newsletter issue to this but figured you would find the following case study more valuable and applicable to your business (not to mention far less navel-gazey). We did record a podcast to mark the event, however, on the changes we’ve seen in the beer industry since we landed our first brewery client back in 2010 (and working with 70+ breweries since).

Otherwise, let’s discuss how to rebrand a brewery, shall we?

We’ve worked with several legacy breweries over the last few years that have found themselves at an inflection point—do you continue to carry on as is, maybe tinkering with your portfolio a bit along the way (assuming things are going well)? Or do you, gasp, sell the entire concern and ride off into the sunset? Or, do you reinvent yourself so you can thrive in the future?

In 2020, with new leadership came a new direction for Mission Brewery, one of the standout outfits of the San Diego craft beer scene (and one of the aforementioned legacy breweries). Several years of flat-to-declining sales followed by a pandemic-wracked market presented an interesting crossroads for the brewery: Under new leadership, what opportunities exist to breathe new life back into the storied brand?

With so much noise, well-earned clout and competition throughout California beer in general (and San Diego in particular), how might we re-invigorate a 100+ year old brand to suit the needs of the contemporary scene while cutting through the din of competition?

To discuss this challenging brief, let’s first take a look back (way back) at Mission’s history. 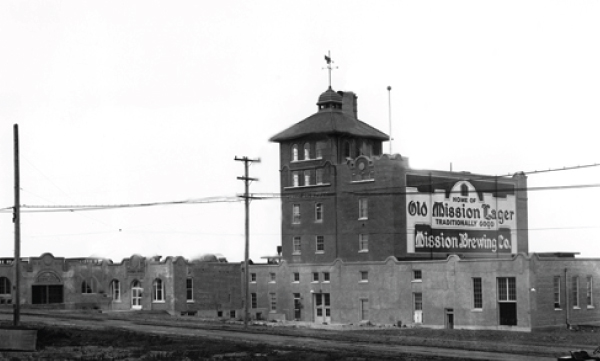 Founded in 1913 by German businessmen who saw an opportunity to capitalize on an exploding lager market, Mission Brewery was originally placed in an iconic facility off of Interstate 5 in San Diego. But an impending push for prohibition (paired with post war anti-German sentiment) caused the original Mission to shutter just five years later.

While other breweries would eventually make use of this original facility, the Mission brand name would sit dormant for nearly 90 years, until 2007 when the brewery was resurrected by a local home brewer. The brewery’s new location next to Petco Park led to raucous crowds of beer-loving tailgaters lining the bar with sales peaking in 2018. But hyper-aggressive local competition and no real long term vision sent the company into a downturn.

With new leadership in place, there was an opportunity get the brewery back to sustainable growth.

Named after the Spanish missions constructed along the coasts of California, the name “Mission” evokes an inherent aspect of California history and its cultural fabric. The 2007 reboot logo, associated artwork and brand image for Mission Brewery revolved around a vaguely nautical, historic, swashbuckling aesthetic.

This iconography can be really fun—I mean, pirates!—but at the same time, everyone involved with the project admitted that it was starting to feel dated and dusty in context. For one, not much thought had been put into consistency of the identity itself, resulting in a proliferation of confusing logo files and packaging that was a little busy, a little dull and easily overlooked in a cold box. 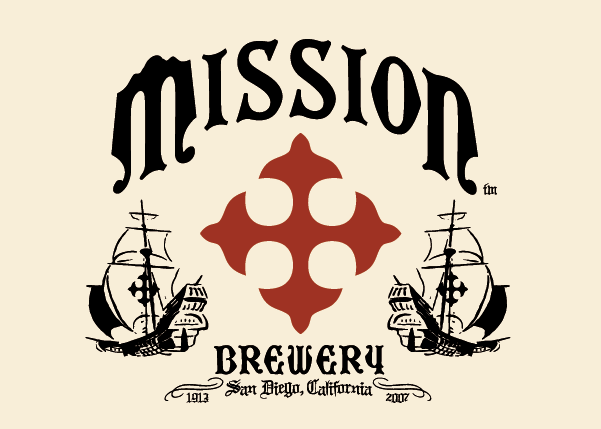 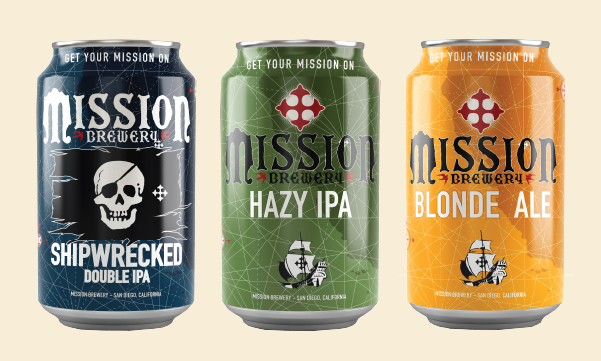 But at a higher level: What did this salty, hard-nosed aesthetic say about Mission's beer and the company’s overall positioning? Does it make sense to cleave to such an aggro, quasi-sinister (somewhat problematic) colonial look and feel? In a world of seltzers and RTDs and better-for-you beverages, does the dark-and-surly aesthetic of the early craft beer boom make sense in today’s market?

Through our brand audit and brand strategy work, we determined that for the most part: no, it does not.

Ultimately, our team decided that it would be a much stronger fit to associate the brand with the local community itself. Our task was to lift Mission out of the old world and into the new, evoking the color and energy and vibrancy of the San Diego scene as it is today while sprinkling in just enough of that charming vintage aesthetic to let you know that this brand has been around for a while.

This thinking informed our brand refresh from top to bottom.

After wrapping up the brand strategy phase, we tackled a comprehensive identity overhaul; an exercise in weighing existing visual equity against broader project goals.

Let's fast forward and look at some of the identity development work.

Here's a collection of images spanning initial concepts presented through a few rounds of revisions, including the super in-the-weeds stuff that no one outside of our shop will ever notice. Example: "Pull the arm on that 'E' in further, Luke. No, fuuurther!") 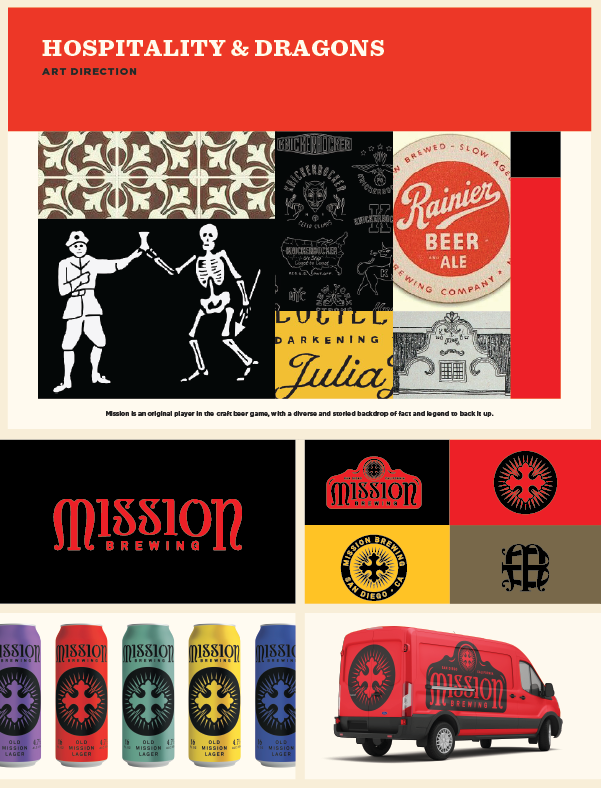 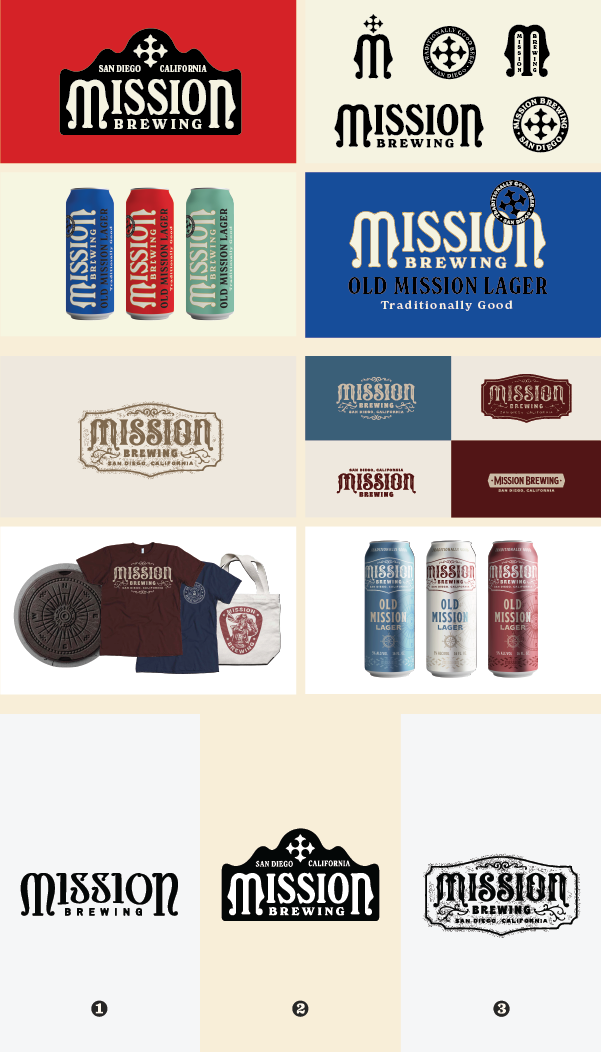 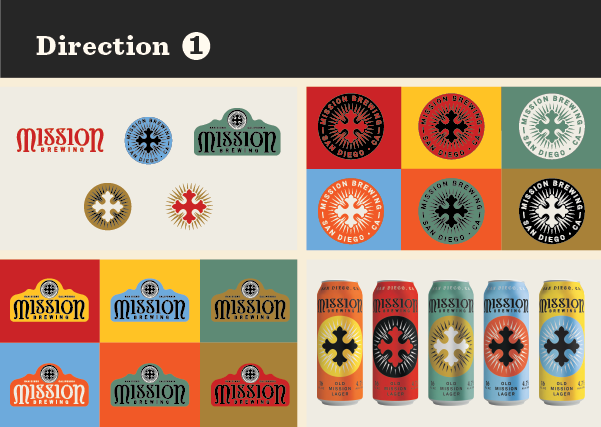 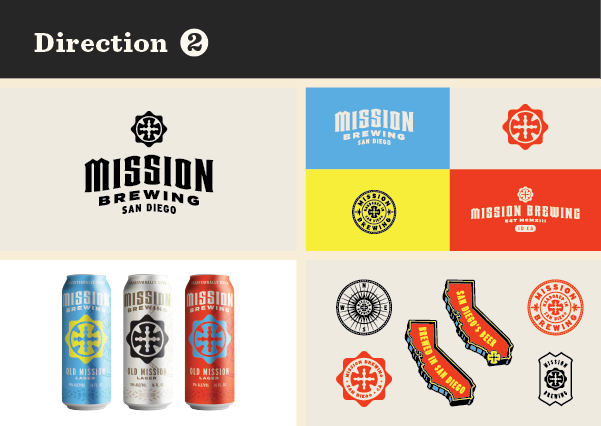 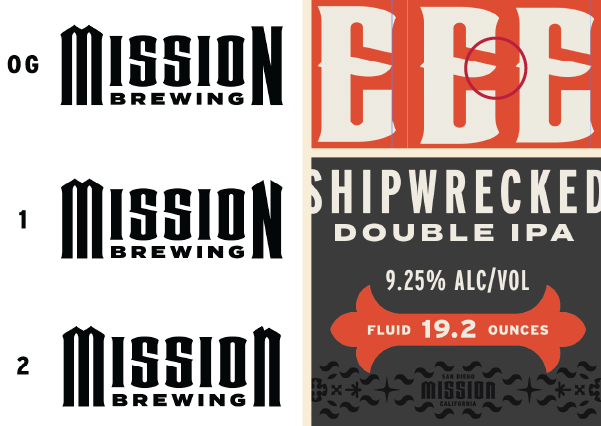 A refreshed brand mark emerged from this process, which allowed us to preserve the iconic red Spanish cross, albeit with a fresher and warmer presentation.

And we're particularly proud of working in authentic Mission architecture style design cues into the typography where possible, to reinforce the history and provenance behind the brand. Mission's historic typography was quirky and fun, but a little too decorative to accomplish our present communication goals.

Consider this phase as a balancing act achieved through hours of tweaking and comparison. Does the new typography/mark maintain that iconic “Mission” feel, while striking a fresh, relevant note at the same time?

Incidentally, we made a subtle change from “Mission Brewery” to “Mission Brewing.” Nitpicking, perhaps, but considering company goals to eventually open satellite locations, it made sense to tweak this naming convention while we were working under the hood.

This first wave of package design is purpose-built to reintroduce Mission Brewing to the market, and to help customers become acquainted with the revived look and feel. Bold colors and a clean, minimal composition come together in a monolithic flagship template that allows new SKUs to be easily whipped up when necessary.

For long-time fans, we stayed true to some design cues from the original Shipwrecked IPA, by bringing in that original skull and red/white/black color scheme.

The rest of the flagship lineup reflects a more modern and market-aware mix of beer styles with vibrant color cues to match. The intention here is to to pique the interest of drinkers who are either new to Mission (or have forgotten about them along the way), or perhaps for those completely uninitiated to craft beer itself.

So other than Shipwrecked, the portfolio is all Mission-forward. Once this work is out in the market for a year or two and has found its sea legs (sorry), we can explore developing more individualized brands within the portfolio to support future growth (exploring a proper Shipwrecked Sub Brand family, reimagining the seasonal program, developing variety packs, etc.).

Mission's portfolio received a revamp as well, introducing more current beer styles and formats. A few of these changes include a phenomenal hazy IPA, 16oz six-packs as well as stovepipes (19.2s) to drive single serve trial and get into sports and concert venues throughout San Diego.

Process Note: If your brewery is considering a rebrand due to any of the issues we’ve mentioned here—increased competition, flat or declining sales, not understanding your own story or purpose, etc.—it’s important that you look at your beer itself first.

Branding is obviously important, but if your beer isn't as good as it can be, or exciting enough, or on trend enough, then a rebrand might not move the needle. Set your ego aside, listen to the market and be open to changing your portfolio as needed (styles, formats, individual brands, etc.).

We've worked with several dozen breweries who have viewed a rebrand as an opportunity for some heavy duty housekeeping. This can include changing or adjusting distributor relationships (where possible), shifting how they approach chain retail sales, how they conduct field marketing, how they handle new product development, how they recruit and retain talent, etc.

This process can serve as a hard stop and reset for how you run your business, if handled correctly.

Here's Mission's final packaging. Look for these to roll out across San Diego this summer. 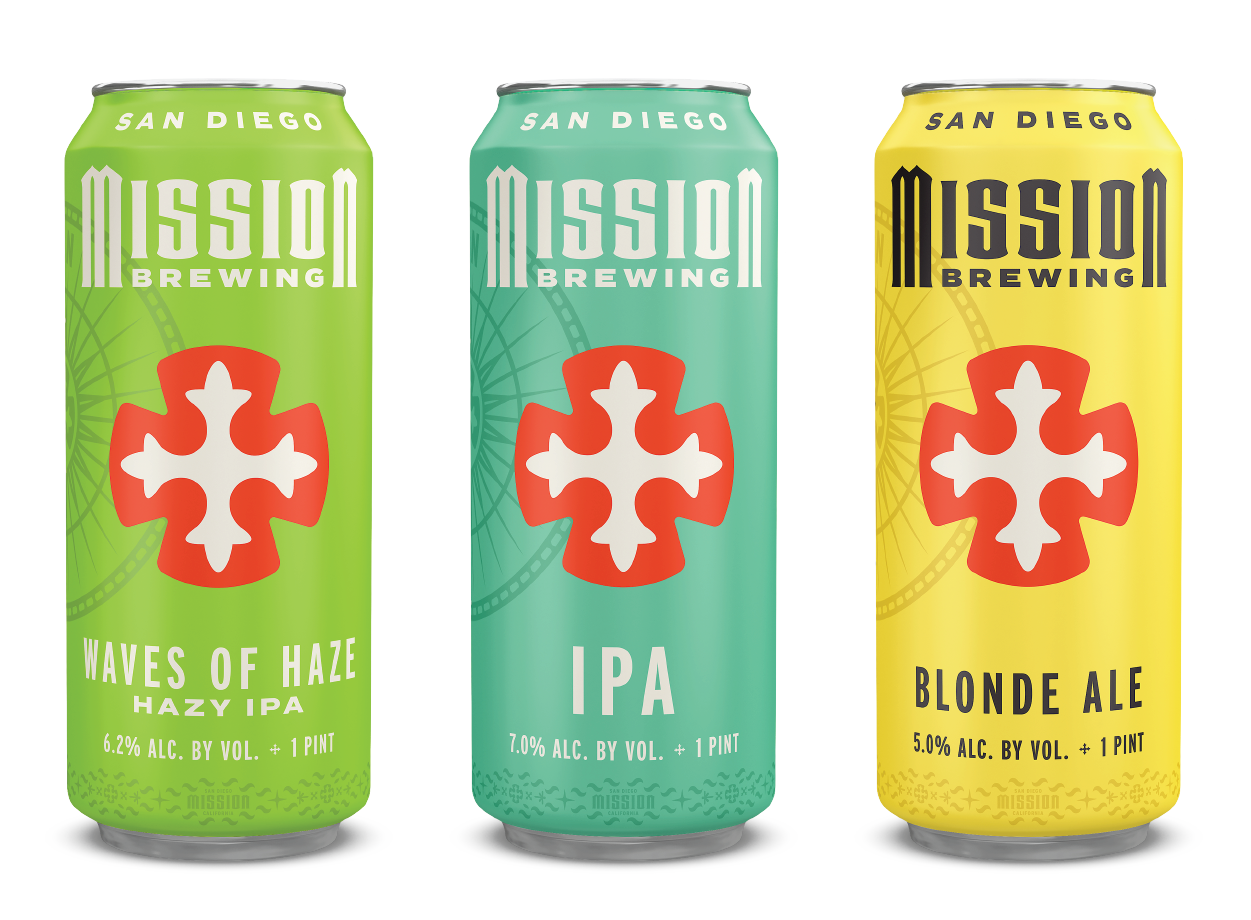 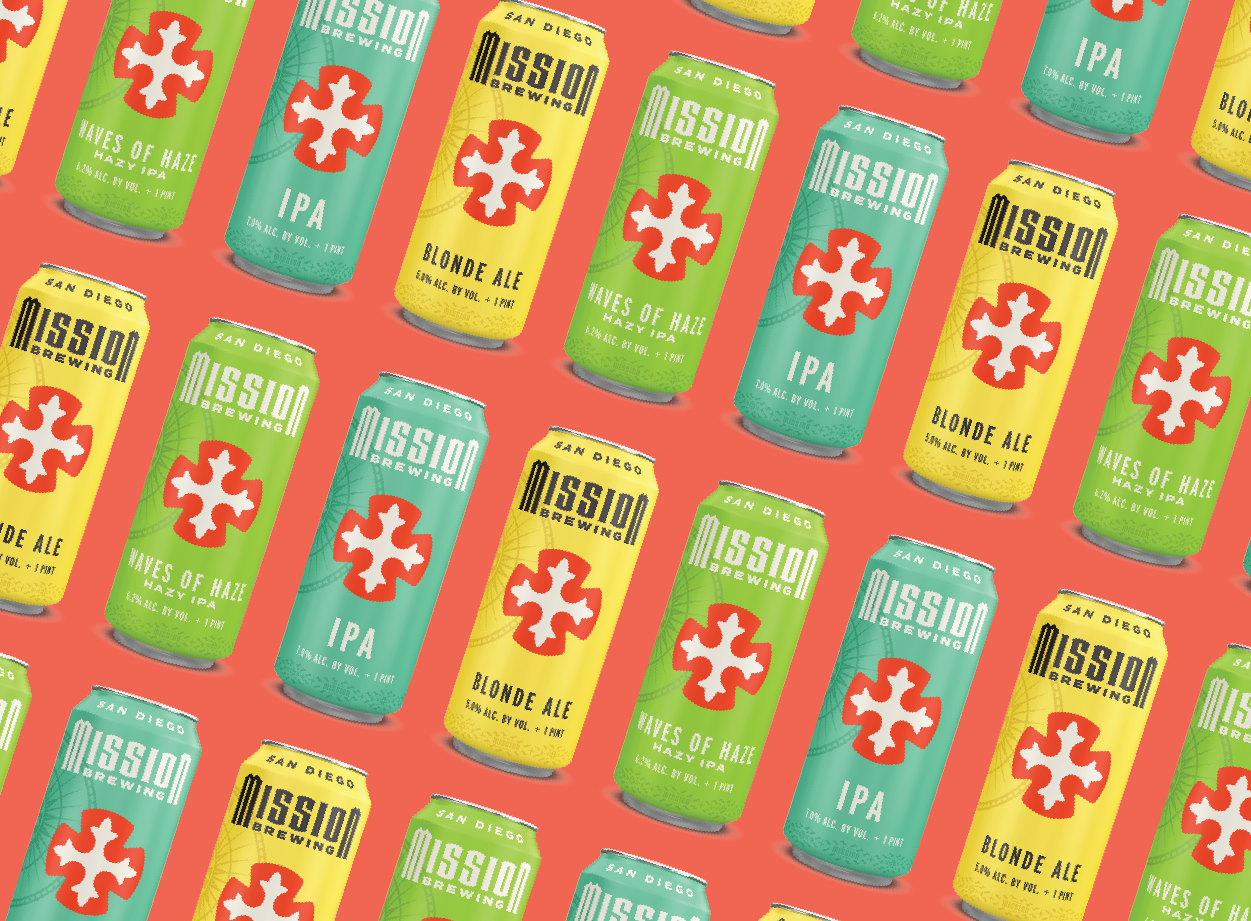 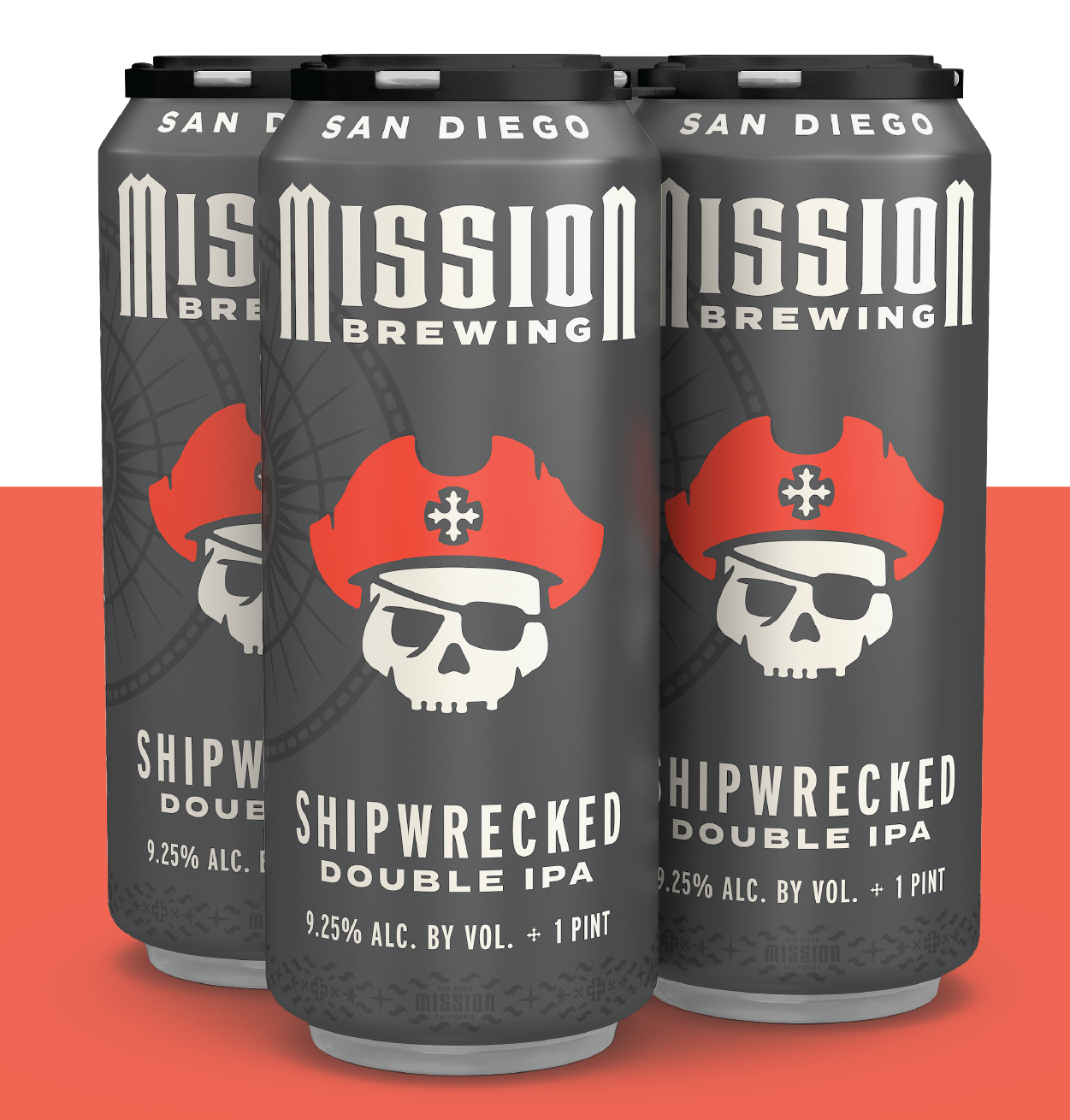 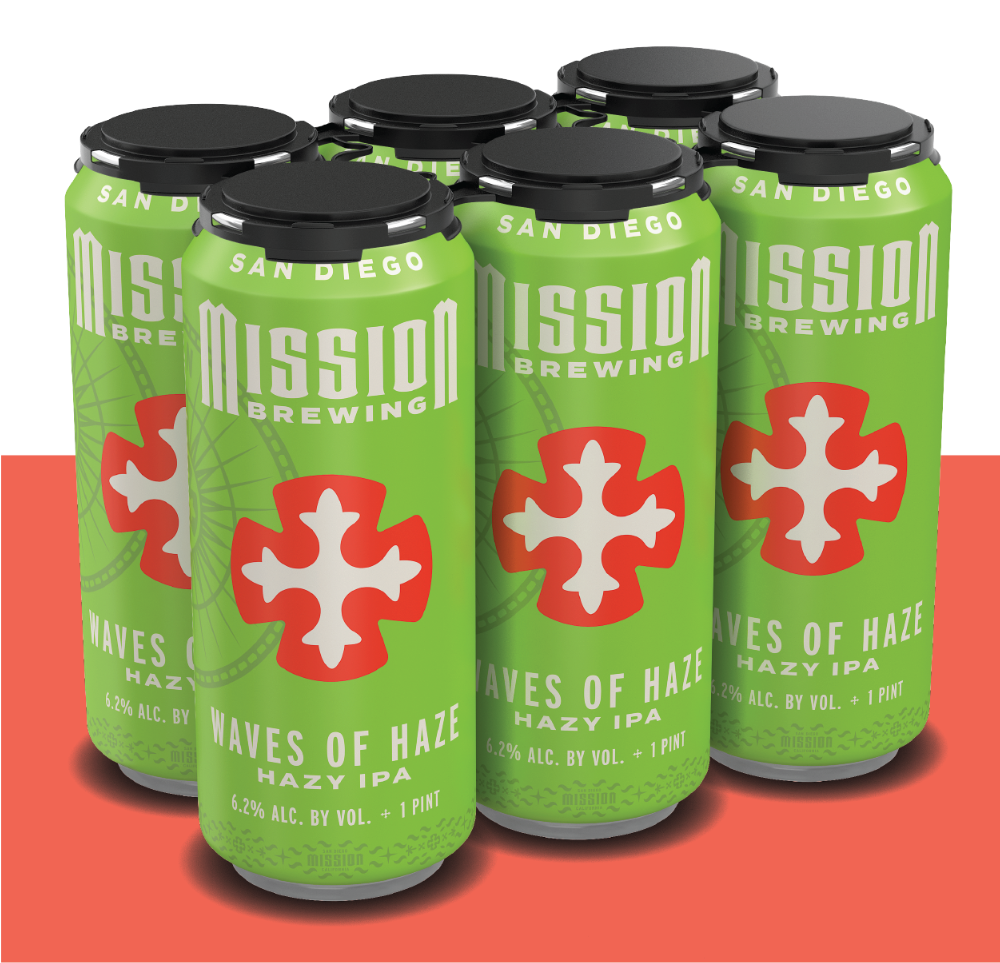 We concluded this batch of work with a suite of supporting artwork, typography and specced colors assembled in a thorough set of brand guidelines. This sets the Mission team up to go forth and build a merch program right off the bat (this can be a strong revenue stream if handled correctly).

It also gives Mission something it has arguably never had before: A focused, compelling message to rally behind and support day-to-day decision making and longterm company vision.

Mission is the official beer of your next San Diego adventure. This core piece works with the refreshed aesthetic to tell a more future-aware story, while standing tall on the legacy aspect of the brand. 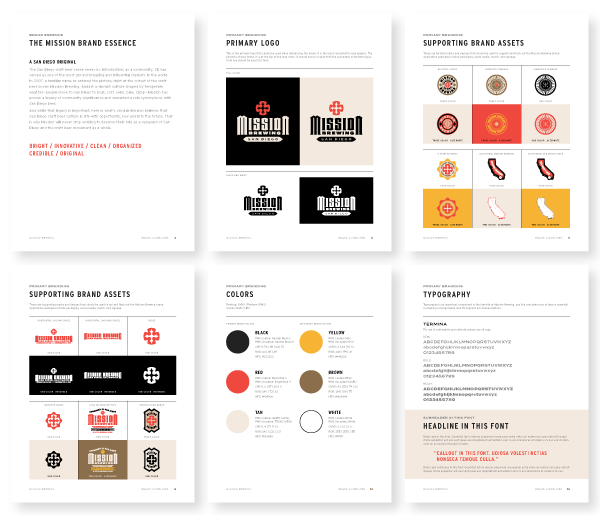 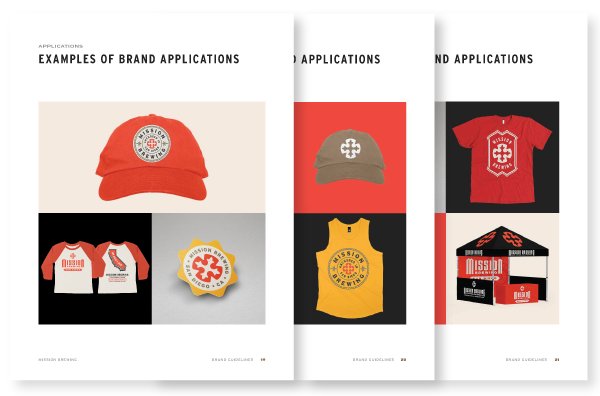 Inheriting a brand with a long history like Mission is a balancing act. Recognizing which elements to honor and keep, and which to jettison can be a challenging exercise.

But whenever we have the opportunity to work with a brand with such good bones, both as beer geeks and design nerds, we get very, very excited. In this particular case, Mission’s team brought their forward-looking vision to the table, and the resulting work is better for it.

In a market fraught with so much turnover and upheaval, a unique opportunity exists for Mission to reassert its place as a vanguard of the finest craft beer market in the world.

And we’re honored to have played a small part in this endeavor.

No matter how many breweries we rebrand, the conversation always comes back to Evolution vs. Revolution. The appropriate strategy for honoring your past while setting yourself up to get where you want to go is rarely black and white, and there is real magic to be found in the nuanced middle.

1. Revisit our podcast episode on this topic.

2. Grab a copy of Craft Beer, Rebranded if your brewery is thinking about undergoing a refresh.

3. Shoot me an email if you'd like CODO's help navigating this process. 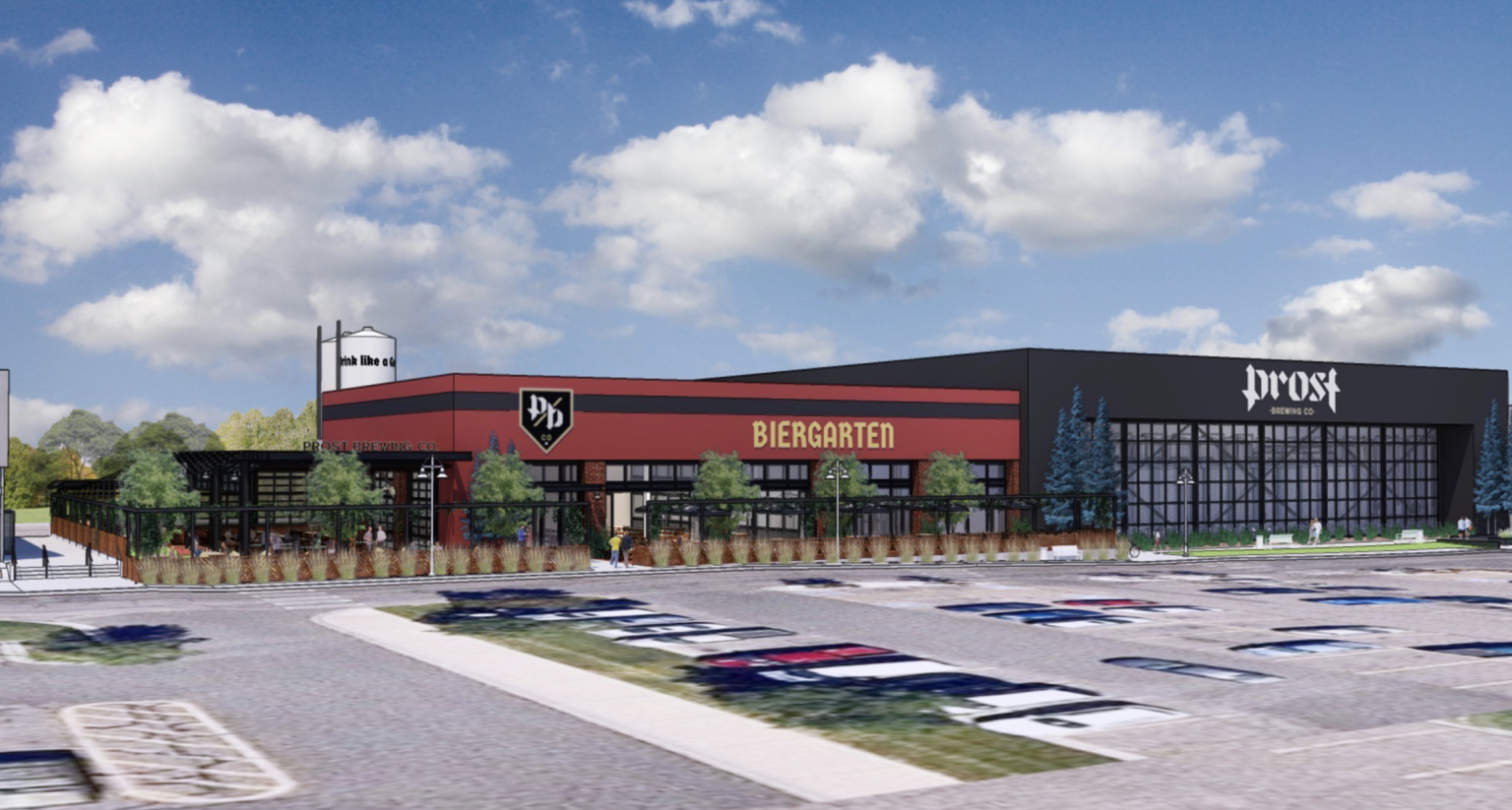 Major Moves over at Prost Brewing

Congratulations to the team at Prost for locking down a spot for their new production facility and regional headquarters. Expect to hear a lot more from this outfit in the coming years.

And revisit our case study on Prost's rebrand from a few years back if you want to see a great example of how a rebrand can set the stage for this sort of expansion. 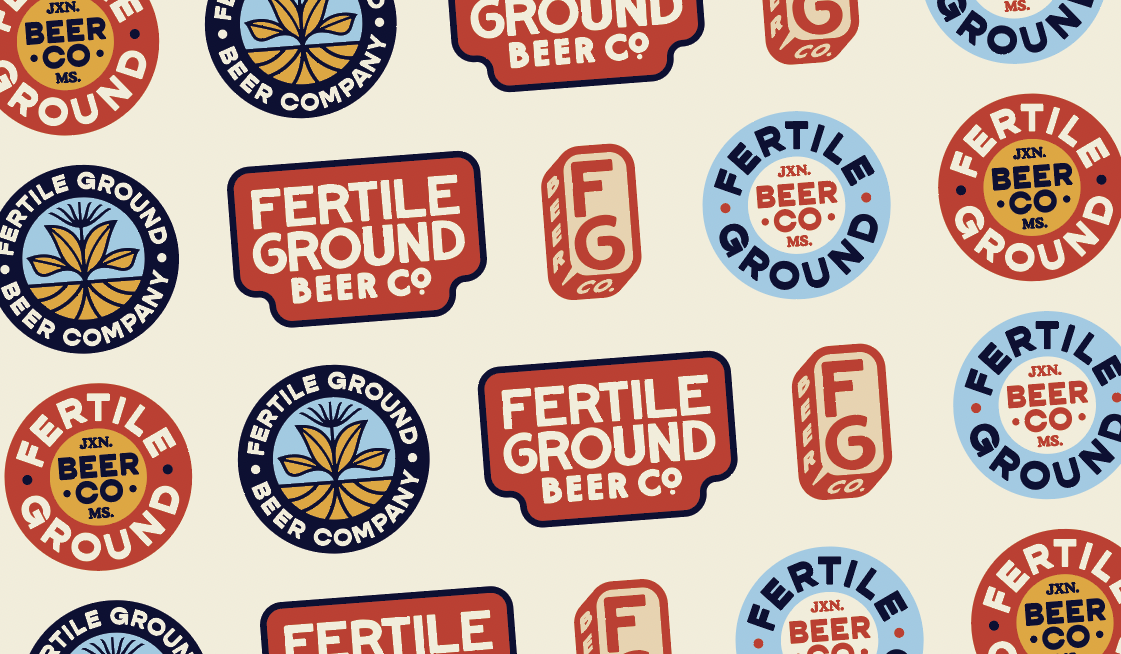 When a Lawyer Opens a Brewery

Here's a deep dive on everything your beverage brand needs to accomplish from an Intellectual Property standpoint, courtesy of CODO's legal partner, Matthew McLaughlin (McLaughlin PC).

And if you want a lawyer with skin in the game, Matthew recently opened his own brewery, Fertile Ground, down in Jackson, Mississippi. We've included a sneak peek of that work in this interview as well. 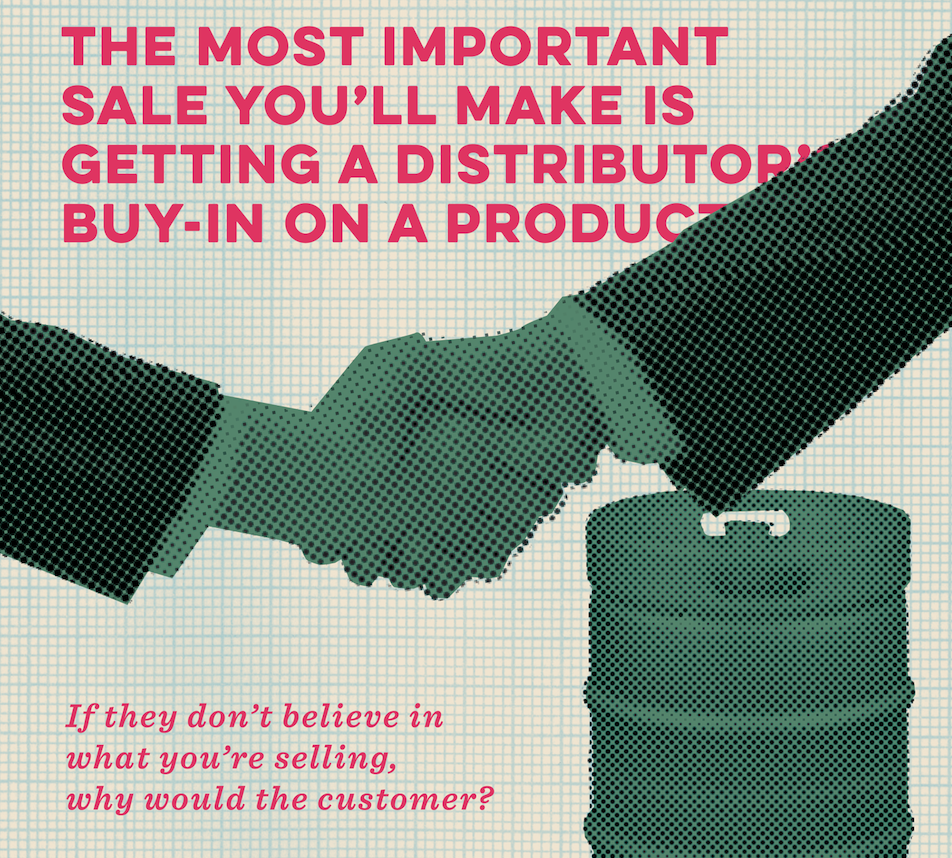 Lessons from 20 Years of Selling Beer

We first met Al Pils (his real last name) when rebranding KettleHouse back in 2018. And we've worked with him and the KettleHouse team on dozens of new packaging and brand development projects since.

Al celebrated his 20th anniversary (!!!) of selling KettleHouse beer this year, and we were excited to be to grab an hour of his time to discuss lessons learned along the way. 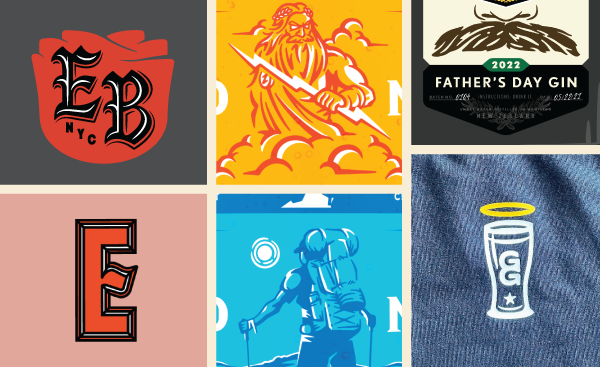 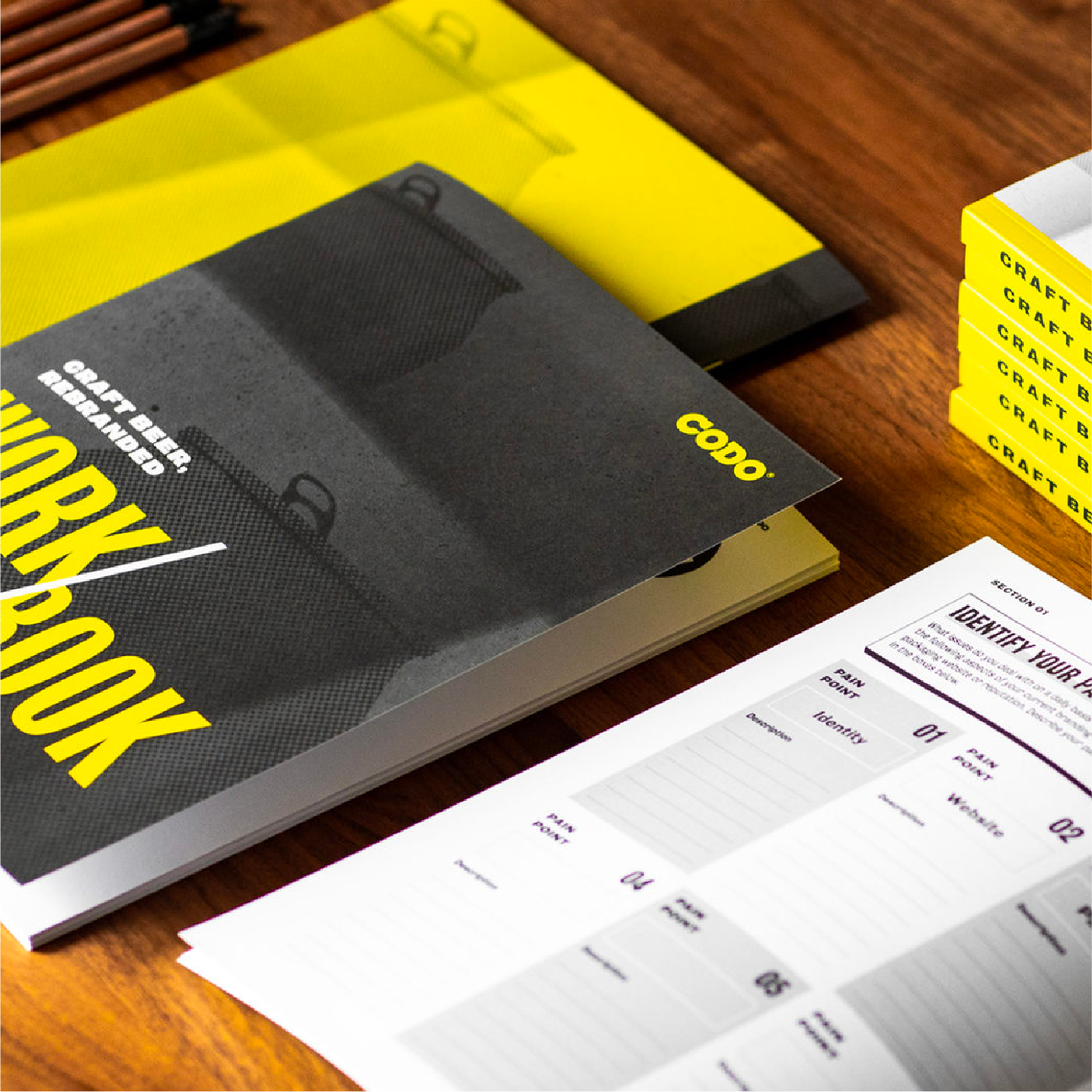 Craft Beer, Rebranded and its companion Workbook are a step-by-step guide to map out a winning strategy ahead of your rebrand. Building on CODO’s decade of brewery branding experience, this book will help you weigh your brand equity, develop your brand strategy and breathe new life into your brewery’s brand.

If you’re enjoying the Beer Branding Trends Newsletter, we’d love if you shared it with a friend or two.

Want to work together?

Email Isaac to get started.